Our large fleet of raiseboring machines, combined with extensive inventories of consumables, provides Raisebore Australia with the dynamic ability to ream raises in metalliferous hard-rock from 0.6 metres up to 6.0 metres in diameter.

Raisebore Australia has drilled over 132 kilometres reamed in excess of 116 kilometres of shafts, the majority of which is comprised of work in metalliferous hard-rock mines throughout Australia; and in New Zealand, Vietnam, Portugal, Hong Kong and West Africa.

Nationally – Raisebore Australia has supplied services and has been an integral part of some of Australia’s largest expansion projects such as the Olympic Dam Expansion Project in South Australia, the Cannington Mine Growth Project in Queensland, and the CSA Shaft and Ventilation Upgrade in New South Wales. Raisebore Australia raisebored the now world-famous horizontal shaft to facilitate the successful Beaconsfield Mine Rescue in Tasmania. 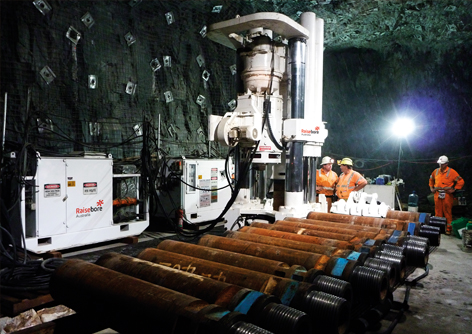