WHAT
Raiseboring the Beaconsfield Mine Rescue

were trapped in a 925 level sill drive almost 1000 meters below the surface following a 2.1 magnitude earthquake. Raisebore Australia was quick to offer assistance and utilised its CD 1000 Raiseborer in the rescue efforts. Two miners walked out alive on 9 May 2006.

At 9:26 pm (Australian Eastern Standard Time) on 25 April 2006 a seismic event with a Richter magnitude of 2.1 occurred at the Beaconsfield Gold Mine in Northern Tasmania (Australia), triggering a rock fall trapping seventeen miners. Fourteen miners managed to find their way to refuge chambers and were removed safely from the mine. Three miners – Larry Knight, Todd Russell and Brant Webb – were trapped by the fall of ground in the 925 level sill drive almost 1000 metres below the surface.

Rescue efforts to reach the men initially utilised a remote loader to clear the fall of ground along the 925L sill drive. On the morning of 27 April, the body of Larry Knight was recovered from the sill drive and conditions were assessed as too dangerous to continue this method in an attempt to reach the estimated position of the other miners.

The Emergency Operations Control Group (EOCG) made the decision to access the location by mining a new access drive from the decline to a position in front of the estimated position of the men. After six rounds of drill and blast mining had occurred, contact with the two miners was established in the evening of 30 April 2006.

Mining was immediately suspended and an 89 mm diameter probe hole was drilled through the face of the excavation, which intersected the 925L sill drive at the exact location where the men were trapped in a work basket. This lifeline hole was utilised to provide first aid supplies, food and water, plus to communicate with the miners regarding their situation and methods to be used to free them.

Raisebore Australia had previously been in contact with Mathew Gill, General Manager Mining at Beaconsfield Mine, offering any form of assistance that the EOCG may require in an effort to free the trapped men. Gill contacted Raisebore Australia’s Managing Director Rod Bertram on Sunday 30 April and asked if it would be possible to utilise their equipment to bore a rescue shaft from the access drive to the 925L sill drive.

The decision was made to utilise the RB 1000 series raise drill machine, which was based in Rosebery, Tasmania, and was being used to provide slot drilling and escape-way shafts on a long-term contract at Rosebery Mine. Personnel and ancillary equipment were mobilised immediately from a number of locations throughout Australia while the rig crew, with the assistance of personnel of Rosebery Mine, removed the machine from the shaft it was drilling and mobilised the equipment to Beaconsfield.

Once the drilling location in the access drive had been identified it was necessary to install a mass poured concrete pad to ensure the machine could be secured to the concrete and into the solid formation utilising chemical anchors. This was an important consideration to allow the machine to withstand the thrust forces required to bore the 1060 mm diameter escape shaft through the 100+Mpa siltstone.

The placement of 14.4 cubic metres of 20 Mpa concrete was achieved overnight during which time the machine was disassembled into components that were within the weight limit of the hoisting equipment and was lowered down the Hart Shaft. The machine was reassembled at the 365 level workshops prior to being carried in a loader to the access drive adjacent to the 925L sill drive.

The machine was positioned on the concrete pad and surveyed in on the afternoon of 2 May 2006. Particular care was taken with the design of the shaft and the surveying of the machine. Any inaccuracy in the design or the set-up could result in a number of disastrous outcomes. If the path of the shaft intersected the lifeline hole that had been drilled through to the miners’ location all communication with the men could be lost which may have been fatal. This would also compromise their medical treatment and could result in profound physiological distress for the men. Alternatively, if the design was not accurate, the men could be injured if the drilling tools were to intersect their position. It was still unknown how stablise the remaining formation that surrounded the area where they were trapped and any high loading of the tool may cause more ground to collapse. The EOGC made the decision to bore the shaft below the floor horizon of the 925L sill drive and to aim the shaft at a small cuddy used for the operation of remote loaders.

This design required the machine to be set up with the shaft designed at one degree above horizontal with the azimuth of the escape shaft taking the hole underneath and to the west of the lifeline hole.

Once the machine had been positioned, bolted and the survey confirmed, all the ancillary equipment was then correctly fitted and placed. In an impressive turnaround time, the rigged up machine was fully commissioned and ready to collar the shaft in the early hours of 3 May 2006.

The pilot hole was carefully collared and once the hole had reached a depth of 2.5 metres, the rig and drill string was resurveyed to ensure the shaft would proceed to the target point without impacting upon the lifeline hole or the men in the basket in the 925L sill drive. The pilot hole was drilled at 9 inches in diameter with a bit force of 45,000 lbs, which resulted in an instantaneous penetration rate of 1.1 metres per hour. The pilot hole was terminated at a depth of 14.5 m, which was estimated to be beyond the footwall in the 925L sill drive.

At the completion of the pilot hole, the drill string was withdrawn and the completed pilot hole surveyed by the mine surveyor. This survey indicated that the pilot hole had moved one degree to the west and the hole had lifted one degree on the dip. It was confirmed through solid modelling that the 1060 mm diameter shaft would not intersect the lifeline hole and would still remain below the level of the basket (in which the men were trapped) once the shaft had been progressed to the 925L sill drive.

A specially modified 1060 mm diameter with a 12¼” pilot reaming bit was installed to the machine and collared into the existing pilot hole. Due to concerns with the stability of the formation, the EOCG had requested that the load applied to the reaming head was minimised to prevent further damage to any potentially unstable formation.

With the requirement to bore through medium-strength siltstone, the cutter loading was maintained at 16,000 lbs of Weight Per Cutter (WPC) with a rotation speed of 7 Revolutions Per Minute (rpm) resulting in an instantaneous penetration rate of 0.465 metres per hour. As the reaming head approached the area where the footwall of the 925L sill drive was estimated to be the thrust load was reduced to 12,000 lbs WPC and the rotation speed slowed to 4 rpm in an effort to ensure the mechanical forces being applied to the formation did not cause a further rock fall or failure. Vibration monitors positioned within the access drive and located in the sill drive with the trapped men were continuously monitored to minimise any risk.

At 6:00pm AEST on Saturday 6 May, the reaming head had advanced 13.7 m from the rock face in the access drive. The EOCG made a decision to complete the remainder of the access and the vertical opening to the basket in which the men were trapped by low impact explosives.

The reaming head was removed from the shaft and left hanging on the front of the CD 1000 machine to allow immediate access for the mine rescue crews to complete the remainder of the work.

From the time when the pilot hole of the rescue shaft had been collared until the withdrawal of the reaming head, it had taken 80 hours to produce the 13.5 metre deep shaft.

The rescue team went on and spent another three days to complete the excavation of the last 1.4 m of the tunnel and remove the men to safety. Brant Webb and Todd Russell returned to the surface and walked out of the cage to remove their tags at 6:00 am AEST on Tuesday 9 May 2006.

Larry Knight was laid to rest at 1:00 pm on Tuesday 9 May 2006. Todd Russell attended the funeral service six hours after being rescued. Brant Webb was unable to attend the service due to his injuries and emotional state.

The CD 1000 raise drill was removed from the mine, underwent an extensive Programmed Component Rebuild (PCR) in Tasmania and was returned to the Rosebery Mine to continue the construction of cut-off slots and escape-ways. 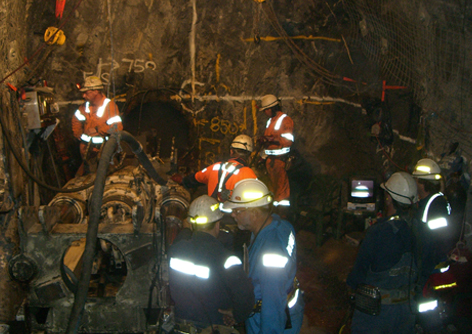