SNAPSHOT
Raisebore Australia was approached my McConnell Dowell to provide equipment and expertise in the development of a highly environmentally sensitive project in the Alpine National Park in the Victorian Alps.  It was required to provide equipment and expertise for the construction of a Head Pond Drop Shaft (HPDS) and a Down Stream Drop Shaft (DSDS).

The Bogong Power Station Project is situated within the Alpine National Park in the Victorian Alps with the HPDS located at the Mackay Creek Power Station (7 km below Falls Creek) and the DSDS accessed from the portal at the Bogong Alpine Village.

This project is the largest hydro-electrical asset to be built on mainland Australia for more than 25 years and comprises the HPDS (6 km long/5 m diameter tunnel), the DSDS, a high-pressure head race tunnel and a power station. The main head race tunnel is one of the largest ‘hard rock’ tunnels constructed in the Southern Hemisphere in the past 40 years.

STAGE ONE  Construction of the Down Stream Drop Shaft

The construction of the DSDS was undertaken commencing on Good Friday in March 2008. Due to the requirement to construct the shaft almost 1 km inside the portal access of the headrace tunnel, all the raisebore equipment had to be taken in through the completed section of the 5 m-diameter tunnel. During the raisebore construction, it was imperative that our activities did not impact upon the ongoing tunnel boring being conducted further upstream in the head race tunnel. To this effect, all the back-up system and materials handling systems for the Tunnel Boring Machine (TBM) were to remain in place and fully functional during all aspects of the shaft construction.

Raisebore Australia used the Atlas Copco Robbins 97 RL DC series raise drill machine to complete the 93 m-deep by 4.5 m-diameter DSDS. The selection of the most powerful machine in our fleet was as a direct result of the ground conditions, which were expected to reach almost 400 Mpa in sections of the tunnel and shaft.

An extensive site plan was developed to allow the handling and positioning of all equipment at the collar location of the DSDS and to ensure the equipment was positioned in such a way that the progress of the TBM was not compromised. This resulted in the disassembly of the machine at a location adjacent to the portal to ensure the equipment dimensions were suitable for the clearances in the tunnel and the component weights were within the equipment handling capacity for the reassembly on site.

Switch gear was installed into the rail system which allowed the derrick of the machine to be loaded across two low loader carriages for tramming in to the site. The low loaders were then shunted to a concrete dock station built at the height of the low loader to allow the equipment to be lifted in to the pre-installed beams at the collar location. This was achieved with the use of a mobile crane and a series of chain blocks that were used to ‘fleet’ all the equipment into position.

The pilot hole was collared and commenced drilling to the intended breakthrough in the high-pressure head race tunnel. The pilot hole was drilled with 75,000 lbs Weight On Bit (WOB), which in the high-strength formation achieved an instantaneous penetration rate of 1.036 metres per hour. The pilot hole broke through in to the lower tunnel on target. As this tunnel had been excavated utilising drill and blast to a project design, it was imperative that the reaming chamber was intersected in exactly the correct position to allow the fitment of the reaming head without the requirement to ‘strip’ the sides of the excavation.

After the removal of the model 60 roller reamer, the centre body of the 4.5m-diameter reamer was installed to the drill string. All four additional segments that comprise the reaming head were trammed in to the location and installed onto the centre body and ‘spudding in’ of the reamer was commenced.

The back reaming of the DSDS was completed with the machine thrust loading at times approaching the Original Equipment Manufacturers (OEM) maximum recommended loading for the cutters. It is only due to the high performance nature of the equipment selected for the shaft that it was possible to complete the 4.5 m-diameter shaft through such strong formations in a single pass without the requirement to lower down and change cutters.

The raisebore machine and all ancillary equipment were once again disassembled within the site, removed via the 5m-diameter tunnel and reassembled outside the portal for demobilisation from the site.

The 4.5 m-diameter reamer was lifted from the shaft collar, positioned above the shaft on support beams with a hole cover fitted and totally disassembled for transport out of the tunnel and off site.

All equipment was removed from the project as the HPDS was to be constructed at a later date and in a different location.

The construction of the HPDS commenced in April 2009 at which time the TBM had excavated almost 6 km of tunnel to allow the HPDS to connect with the shaft almost 140 m below the collar location.

Surface construction work for the HPDS had seen the Principal Contractor form and pour the walls for the diversion of the tail race water from the Mackay Creek Power Station. The construction work had also seen the preliminary excavation of the upper section of the HPDS to allow a square to round transition form to be set, poured and cured prior to the arrival of the raise drill machine.

Once again, the Atlas Copco Robbins 97 RL DC series raise drill was selected due to the expected strength of the formation and the final shaft diameter that had been determined to be 5 m. The raiseboring equipment was transported to the collar location and installed on support beams that spanned the 5 m square section of the surface construction allowing the equipment to sit on top of the walls of the diversion and collection infrastructure.

Due to the setting up of the square to round transition in the HPDS and the deferred nature of the work, the Principal Contractor had excavated the shaft to a depth of 29 m below the top of the walls. This required the installation of a ‘stand pipe’ to recirculate the drilling fluid to provide cutting removal and resulted in the pilot hole being collared at a depth of 29 m. This collaring was successful and the pilot hole was drilled with between 50,000 and 55,000 lbs Weight On Bit (WOB), resulting in a drilled length of 108 m with an instantaneous penetration rate of 1.056 m per hour.

Due to the design of the connection of the HPDS into the head race tunnel, there was a minimal level of tolerance for hole deviation. Although the client had decided not to utilise directional drilling techniques, the breakthrough of the pilot hole into the head race tunnel was within the tolerance and the construction of the reaming chamber commenced.

When the chamber was completed, the 5 m-diameter reaming components were required to be transported 5.7 km along the 5 m-diameter tunnel prior to assembly to the drill string. Due to the accuracy of the drilling breakthrough, it was possible to place the centre body and stem of the reamer on a rail low loader and to shunt the component directly underneath the drill string for connection. Once the centre section had been fitted, the remaining four additional segments that make up the 5m reamer were transported to the site and installed.

The reamer was lifted to the ‘backs’ and ‘spudding in’ using controlled drilling techniques was completed prior to the introduction of the required thrust and rotation to complete the shaft. The reaming of the 108 m of the HPDS was completed in a single pass without incident. The connection of the raisebore shaft into the pre-cast section of the concreted shaft was seamless.

The reaming head was then lifted to a position underneath the machine and ‘styed off’ to the support beams. This allowed the reamer to be lifted from the top of the constructed walls without the requirement to access the bottom of the shaft via a 14 km drive on public roads and a 5.7 km rail voyage into the head race tunnel.

The raiseboring equipment was rigged down, lifted from the work location, cleaned and packed and demobilised from the Mackay Creek Power Station site.

Raisebore Australia completed this most challenging and rewarding major infrastructure project without a single reportable incident. There were no environmental incidents in one of the most pristine environments and under the toughest of compliance requirements. There was not a single Lost Time Injury/Disease (LTI/D) or even a Medically Treated Injury (MTI).

This is proof that with the selection of the right equipment and personnel, coupled with a real commitment to excellence in environmental management and high-level project planning, it is possible to deliver exceptional outcomes in a zero-harm environment. 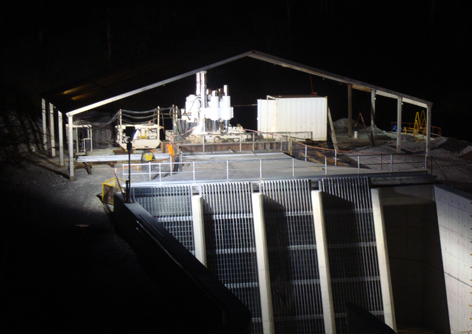